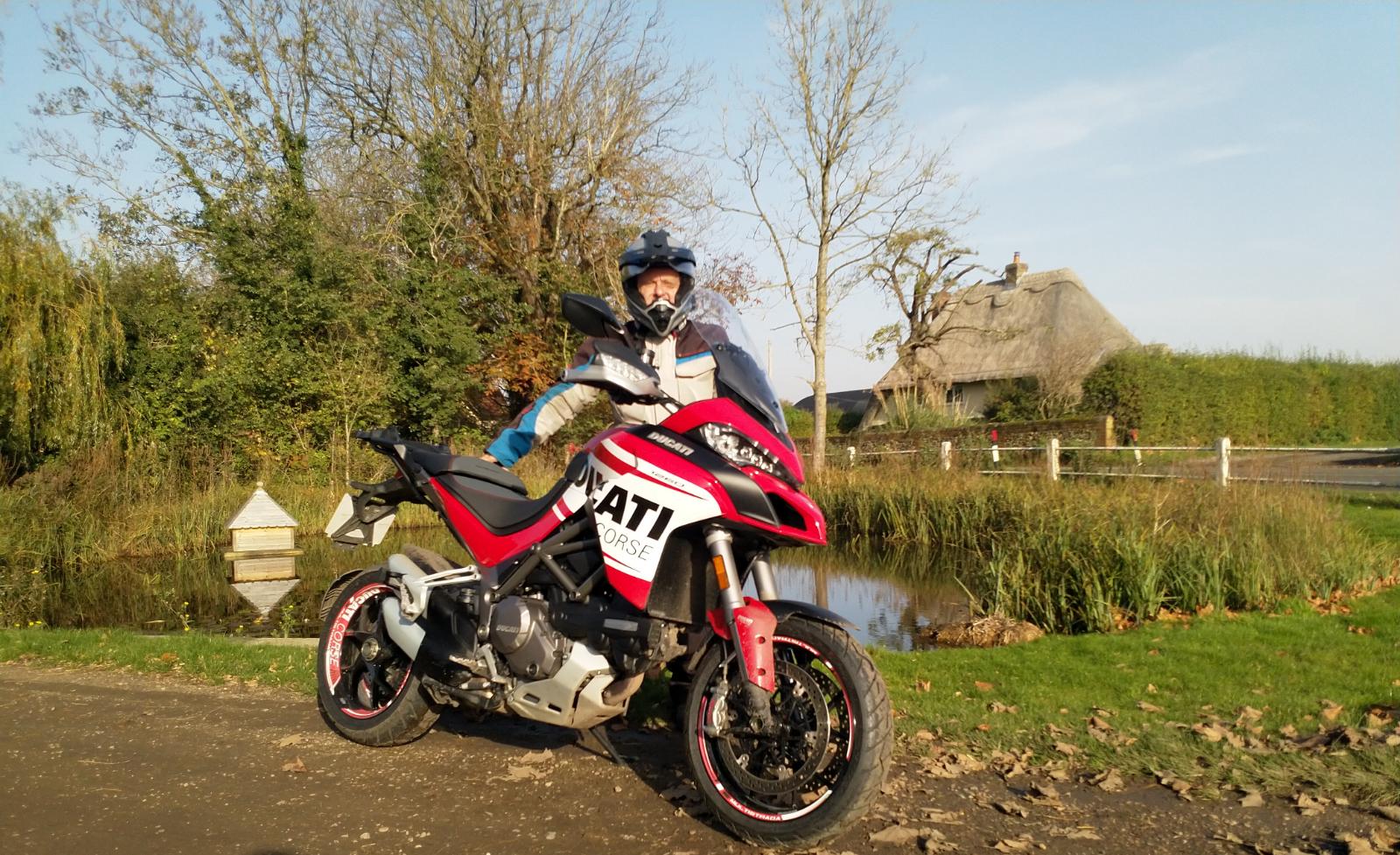 Firstly, I would like to say I hope you and your families are keeping well in these trying times and hopefully we will all see the light at the end of the tunnel soon.

Well, the Beema is 4 years old and time to change the bike, but I was determined not to buy another GS Adventure, (a change is as good as a rest as they say) although a brilliant bike, even I drew the line this time as it would have been 6 in a row. So I bit the bullet and test rode a few bikes: BMW 1000XR, KTM 1290 Adv. KTM 1290 Super Duke GT, and the Ducati Multistrada in both the 1260s/900s versions. All were brilliant bikes to ride so this was going to be a tough one as all bikes had their good and bad points.

I personally thought the BMW S1000XR was the best of the bunch but I couldn’t bring myself to spend upwards of £18k plus all the hassle of the dreaded insurance. So after much deliberation, I opted this time for the Ducati Multistrada 1260s – I can sense GS owners jaws dropping to the floor.

I kept my eyes open hoping to get a deal and a cracker of a deal came up, a one year old bike with only 2000 miles (but importantly the boringly run-in period had been done) and full luggage at a brilliant price, £1300 cheaper than anything else on the market. It wasn’t local, unfortunately so couldn’t see the bike let alone test ride it.

I must admit I was very sceptical at first as I always buy new and to buy a bike blind was totally alien to me and scary to boot. I called the company and they sent me loads of photos, a video and a brief history, which helped put my mind at ease. I also doubled checked with the Ducati database and it all came back clear. The dealership offered a great p/x on my bike, free delivery and the bike serviced. So the deal was done.

The dealership gave me a date for delivery and when the bike finally arrived, I was like a kid at Christmas, full of excitement. The delivery guy was polite and very knowledgeable, although he did manage to stall it 3 times before reaching my garage which did set alarm bells off and did somewhat dull the excitement. Was it him or the bike…?

Luckily it was him, obviously not an ELAM rider, as I took it out for a spin later that day and it ran like a dream, phew!!

Having had the bike for a few weeks now, I am still struggling a bit to get the hang of it, its like chalk and cheese between the Ducati and GS. The biggest difference is it tips in very quickly into corners, almost feels like it’s going straight to the floor, this is mainly because it has a smaller 17″ front wheel unlike the 19″ front wheel of the GS, also I’m not keen of the way the front end dives when braking – it is very disconcerting. The Telelever system on the GS sorts all that out when under heavy braking, but I’m sure given time I will adapt my riding style and get used to it.

If Valentino Rossi, can change his style I’m sure I can ????

Another difference I’m got to get my head around is the Ducati’s throttle control, it’s ultra-sensitive and when holding it keeping at 30 mph is quite difficult, it’s a bit like a switch, it’s either power on or engine braking without the smooth transition, maybe that’s because of the ride by throttle, not the old school throttle cable.

Comfort-wise though it’s superb and I’m looking forward to cracking out some touring miles in the near future. A big bonus for me is I can flat foot the tarmac (very novel after the GS). Although it’s hard to keep at a steady speed (maybe that’s the V twin layout) the engine itself, however, is really smooth and it’s very powerful, I’ll have to make sure I keep on top of that. The gearbox is brilliant on the upshift, the downshift however not so much, it can be a bit hit and miss if it’s going to work or not – visit to a dealership I think. The TFT screen is very easy to read, you can connect it directly to your phone from which you can play music and take hands-free calls. You can also connect to the Ducati Link app that enables you to record routes and alter stuff on the bike from the phone, all very clever stuff.

The electronic options are endless, from race, touring, urban and enduro modes, then all the options within the options are mind-blowing, the owners manual is like “War and Peace”. Once set up, I can’t see myself touching it again except for the odd tweak i.e Folembray track day.

Fuel consumption at the moment is about 45mpg which is 12 mpg down on the GS. I’ve seen the reserve light twice since I’ve had the Ducati (two weeks) and once in 10 years on the GS at 23000 miles. I’m not totally comfortable on the Ducati yet, unlike the GS which basically smooths all surfaces and is not fazed by gravel, mud, water and rough roads the Ducati gives much more feedback through the bike you literally feel every crack and ripple in the tarmac.

One expense I didn’t account for though, is a new helmet, I can’t use my current BMW one, now can I. Well, that’s what I told the wife…

Would I buy another ?? Yes definitely… it’s Italian, it has the odd quirk but it’s aesthetically pleasing, comfortable, powerful and a sweet engine (think style over substance ????)

Would I ride it through a ford?? Yes… but very gingerly.

Would I ride off-road? Definitely not, 17″ alloy wheels are a no-no.

Would I try a track day? Damn yes!!

Wishing you all a safe and Merry Christmas.