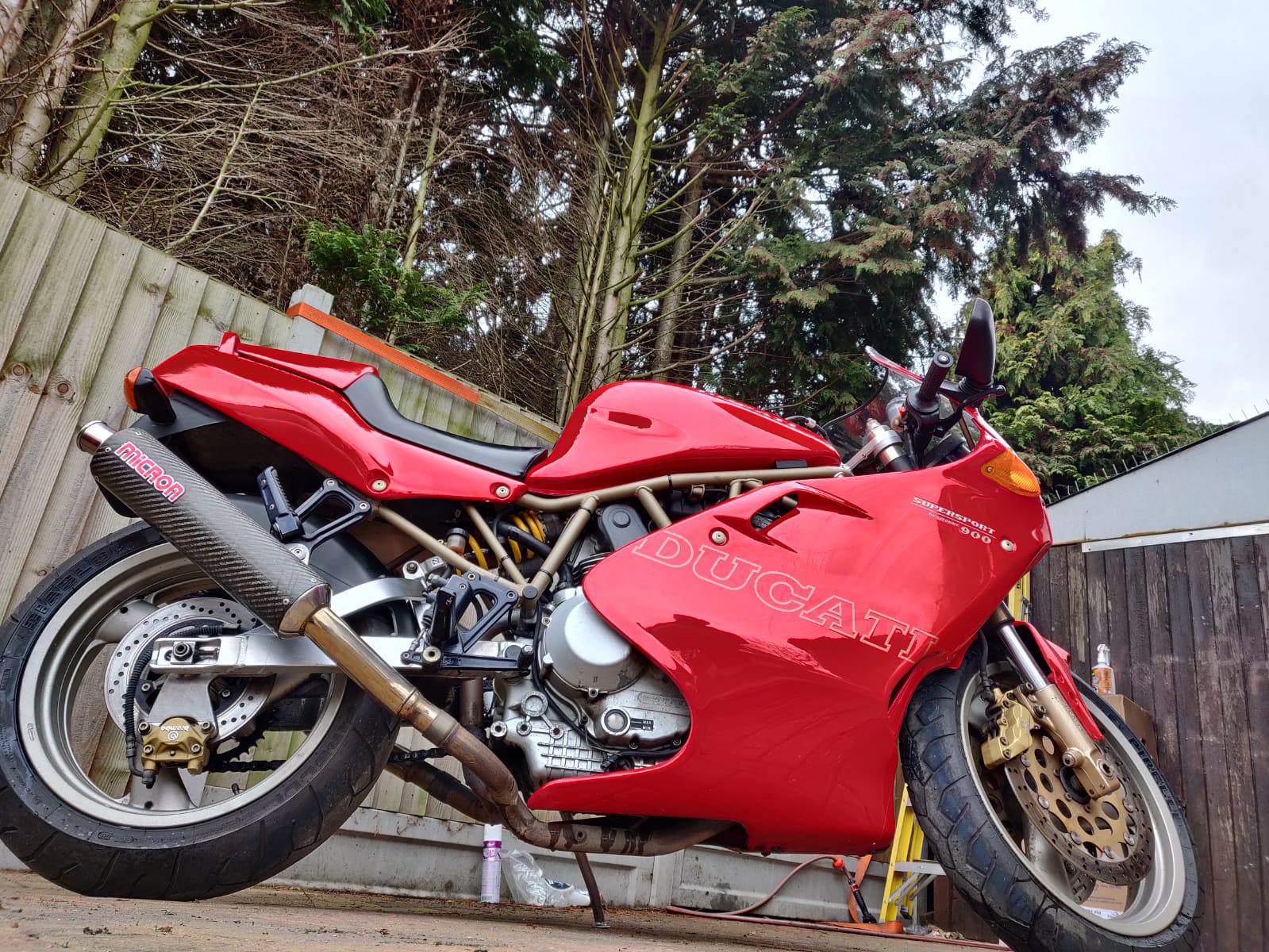 Well this is quite a long and strange,  maybe even a story we can all learn from.

My parents live in the Algarve Portugal, which in addition to the glorious weather has some fantastic roads. I’ve always wanted to ride a bike over there and often thought about hiring one. However, hiring a bike anywhere isn’t cheap, so I’ve never bothered (as I’m tight wad????).

My father’s friend Erik, who used to be the chairman of a Norwegian Motorcycle club, spends his time between Norway and Portugal. He also owns a Ducati 900ss, which he used to ride everywhere, including from Norway to The Algarve. He said I could ride his bike if I was over in Portugal as vehicles in Portugal are insured, not the person.

Unfortunately he had an accident (not bike related) and can no longer ride. His bike is now sat unused, so he decided to sell it, and as he knew I was a biker he asked to see if I wanted to buy it. Of course I was interested, to have my own bike out there which I could use when visiting the folks would be great.

So many questions facing me – how much is it worth? How much work is needed? Is there a specialist who could do the necessary maintenance? Although I love a bargain, I’d never offer a silly or unfair offer. You couldn’t really use the British market value, as the value of second hand vehicles out in Portugal is much higher than the UK. So what do I offer without offending him and not ripping myself off?! To be fair, I hadn’t really a clue.

So a few messages went back and forth. Then I got a message from my Dad saying he’d come to an agreement and brought it! Shocked was an understatement. Once the shock had subsided, I had to go about getting it ready for use as it had been sitting for quite a while. I was budgeting for a full service, tyres etc. I even decided to get the major Desmo service done, as Erik couldn’t remember if it had been done. So first thing to do was to find a good bike garage that could be trusted and obviously getting the bike in my name.

That’s when  you could say the sh#t hit the fan – the bike was still Norwegian registered. Can’t be that bad to register in Portugal, could it? Well apart from the hoops the Portuguese want you to jump through, the cost was nearly €1500 which in all honesty made the prospect a non starter, as you probably could get another bike already registered for the money this is all adding up to. I even contemplated the ideal of turning it into a track bike.

So while we scratched our heads trying to find a way around this. Another one of my Dad’s friend, Jav, who lives in England and has a property in the Algarve, was driving back to his home city of Manchester via Dover and the route he’d take would take him within a few miles of my house. So for a very reasonable fee of £50, Jav agreed to bring the bike back with him. A couple of days later with the meeting place agreed we met up. We met at just gone 10pm, must have looked suspicious middle of the night two vans swapping a bike from one to another.

Although I had a motorbike ramp, Jav didn’t, they must have fun loading the bike back in Portugal. So with one van backed up next to the other , we carefully handled the bike from one van to another , which wasn’t easy as the two vans were at different heights, but after a few dodgy moments the bike was transferred. I offered Jav his £50, which he refused to take, so it is true that superhero’s don’t wear capes ????????.

A few days later I gave the bike a once over and a good clean, even my son Graham came around to help. It looked very nice, but it needed a new battery before we could at least hear the bike running. New battery was ordered and fitted and although the bike turned over it wouldn’t start. So what could it be? (Mechanics not one of my strongest subjects) I knew I had to get it all serviced etc, so presumed it’d all get sorted then, I wasn’t unduly worried.

I was up Hyside’s (a Ducati dealer) a few days later talking about the bike and booked the bike in for discounted price full Desmo service and they would even pick up and drop off the bike. Shortly after they collected the bike and needed to order a few parts the corona virus hit and things started to shut down. As I wasn’t in any rush, it didn’t bother me them having it, done me a favour really as I had no space.

Anyway, after a few weeks bike was done and dropped off. So now I have to decide if I should register it over here and have a road bike or continue with maybe turning it into a track bike. Obviously, depending on which path I choose I still have little things to do like new tyres, changing brake fluid and so on. Typically now as nothing has gone smoothly, the bike again refuses to start, this time an electrical problem ????.

So once I found the time, I tried to source the problem, took fairings off ,looking at the wiring, what I could see and get to that is. I couldn’t find any obvious problems, no damaged or corroded cables (water ingress), it is a Ducati after all. Managed to source the problem, more luck than judgement if I’m honest, found a relay that was unduly warm. Went to my local dealer purchased a new relay and “Bob’s your Mothers’s Brother”the bike starts straight up.

Now do I put the fairing back on, or do I clean up the bike underneath and get the fairings sprayed up.?

So would I buy a classic Bike again?!?

Maybe! But, only if it was running and it’s not been sitting for ages.

They say, we learn by our mistakes…