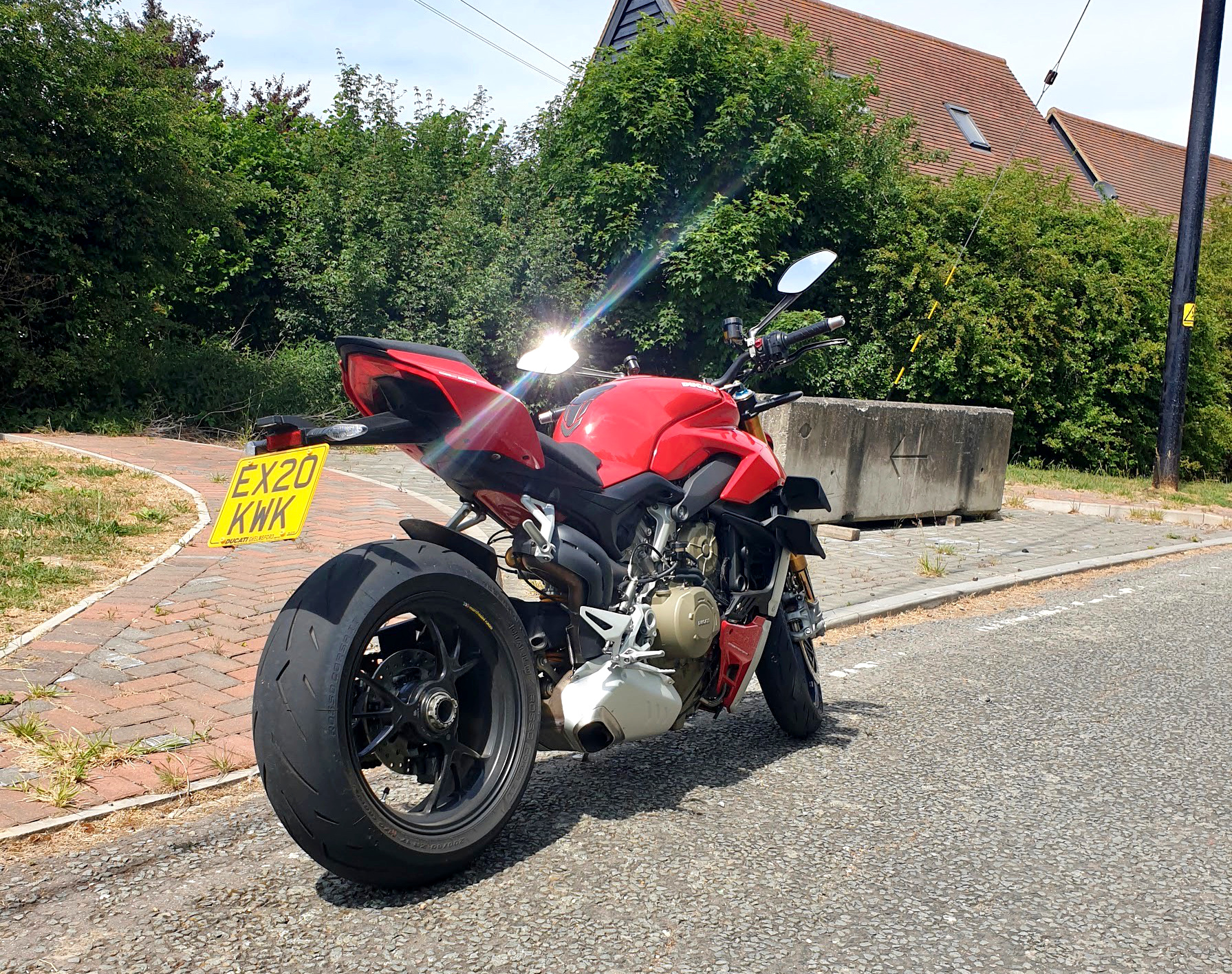 moved from Romford to Maldon. It’s not too far away to be fair, but if you haven’t got time it can be awkward, I used to drop it off the day before, which suited us both, I could then go to work and they’d have the bike ready first thing, but anyway I digress. My bike’s service was overdue by a month or so, but because of Corona Virus it hadn’t been possible to do it on time.

With the service booked and them needing my bike for 3 hours, rather than hanging around like a bad smell, I asked if I could take a new Ducati V4S Streetfighter out for a bit. They kindly agreed. Having taken plenty of money off me in the past, and with my current service, they’d be stupid to say no wouldn’t they?! LOL

So a little bit about the bike, as most of you clued up kids know, the Streetfighter V4 is a naked version of Ducati’s Panigale superbike. However, it’s a little more involved than just a case of removing the fairing though. The riding position has been altered to a more upright comfortable position, achieved by handlebars rather than clip ons (see description). The foot pegs and foot controls have also be adjusted to suit a more comfortable, its not touring comfort, it’s still has a sporty feel, which is what Ducati want , they have the Multi Strada to go touring on, not saying you couldn’t tour with the Sreetfighter. Overall it’s a comfy but sporty place to be, so off we go.

Upon starting the bike it barks into life and it sounds glorious, even better than the Panigale (still as ‘LOUD’ though), even though it has (or appears to be) the same engine and exhaust. Select first, let the clutch out and off we go, not in a cloud of tyre smoke and screeching, well the bike does have over 200 bhp!! Crazy for a naked bike, what could possibly go wrong?!

This bike is surprisingly civilised and well behaved. If you didn’t know about the vast power output, you could think you’re on any medium size naked bike. The one thing that’s a bit of a shock and quite surprising, maybe even unnerving at first, is the way the bike turns in, which gives you a clue to what this bike is really about. People who ride sport bikes will know what I mean here.

“the bike just fails in!”

When you turn, the bike is so precise and steers so quick, it just seems to drop and you get the feeling it’s going to keep going until it and you hit the deck. Obviously (or should that be thankfully?) it doesn’t, but it’s a bit unnerving at first. But, soon you forget about it and start to enjoy the sensation.

Being such a powerful bike  you’d expect good brakes, well the Sreetfighter has them in spades. If you grab a handful, I could see you flying over the handlebars like you did as a kid on your pushbike (got the chipped tooth to prove it). Again, it only takes a little while to get used to them and use them wisely. Even the back brake seems to do something, I think the one on the Panigale is just an ornament.

I believe Ducati has altered the characteristics of the engine, as it appears to have less go than it’s Panigale sister. Don’t get me wrong it’s still like sitting on a missile, if you’re brave enough to fully crack the throttle wide open. However, they have improved midrange torque, so you have plenty in reserve for safe overtakes, whatever gear you’re in. No need to be faffing around looking for the right overtake gear. You can quite happily cruise along at 50mph in 5th gear without a care in the world, and if the need arises to make a overtake, a slight twist of the wrist sends you happily and safely past the said overtake. No dramas, which makes for a rather relaxing and maybe even lazy ride.

However this isn’t what this bike is all about is it? If you want a lazy ride, you’d buy a cruiser. I’m guessing this has been made for the sport bikes fan that may be getting a bit older, a bit stiffer (leave it LOL). Now, you can have all the fun of a sports bike without the painful downsides, no aching knees and wrists and absolutely no need to dress like a power ranger either (unless you want to). A suitable leather jacket and a pair of jeans (armoured of course) would be a more natural look.

Being on the rather sporty side, the Sreetfighter would be great on track days, if that is your thing, you could even benefit from the aero wings at the front which create serious down force at high speed. The wings are very Marmite, you either love them or hate them, I personally don’t like them, I think they ruin the look. However, Ducati have said they’re not just there for high speed stability, they actually help the bike turn at lower road speeds, and they should know, I can’t see them putting them on just for a bit of garnish, it’s not a Halfords special

The price of this motorbike as you’d expect isn’t cheap, I don’t think Ducati do cheap. The base model is just shy of £18k and the S with electronic suspension and lighter wheels is just under £20k. I don’t have the exact figures, I thought a ball park figure would suffice. So is it worth all that money? Hard to tell if you compare the S versions or the Streetfighter with the Panigale, the Streetfighter is £4k cheaper. So are Ducati charging £4k for a fairing! There’s obviously more to it than that, however £4k does seem a lot more, so in that instance the Streetfighter does seem like a good price (if you could ever call £20k a good price). If you compare like for like (nearest bikes for comparison) the new Superduke R, and the Kawasaki ZH2 They are just shy of £16k which makes the Streetfighter fighter expensive.

As with all things, nothing’s that easy. Brand names come into equation. Like it or not, Ducati is a premium brand, which does allow them to charge more and get away with a higher price. It’s a bit like mobile phones, is an iPhone better than say a Samsung Galaxy, probably not, but it always has a premium over its competitors, and better resale values. Some people buy an iPhone because it’s an iPhone, not because it’s better, the same could be said for people who buy Ducati’s over say a KTM. Personally I reckon people buy other brands because they like the bike , not the reputation.

Not saying Ducati make worse bikes, far from it, but maybe they can massage the price a bit and get away with it. If you forget about the price (hard to do I know), it’s a very well made, a fantastic bit of machinery and great fun to ride.

Just asking, only need one kidney don’t you…?

Thanks to Chelmsford Ducati (Hyside) for the loan of the bike

Clips ons are individual items (one left, one right) that are generally mounted on the front forks, positioned low and meant to make the rider lean forward so they are hunched over the tank in a lower body position. Which makes the rider more aerodynamic, hence why they were introduced for racing.